With a smart irrigation system, soil conditions can be monitored in real time by using a low-power wireless Wzzard LRPv sensor network. Wzzard LRPv Nodes transmit data wirelessly to a network gateway, which then sends the data to your PC or Internet cloud applications. The most practical gateway would be able to connect via both wired and wireless networks, meaning that sensor nodes can be positioned in most locations.

Your software can then combine your data with third-party information such as weather reports from national weather services. This enables your system make intelligent decisions about where and when water should be released and how much should be used. For example, the system could release water immediately when no rain is forecasted; in the event ha forecasts predict rainfall, the system could wait, measure the results, and recalculate the amount of required water. 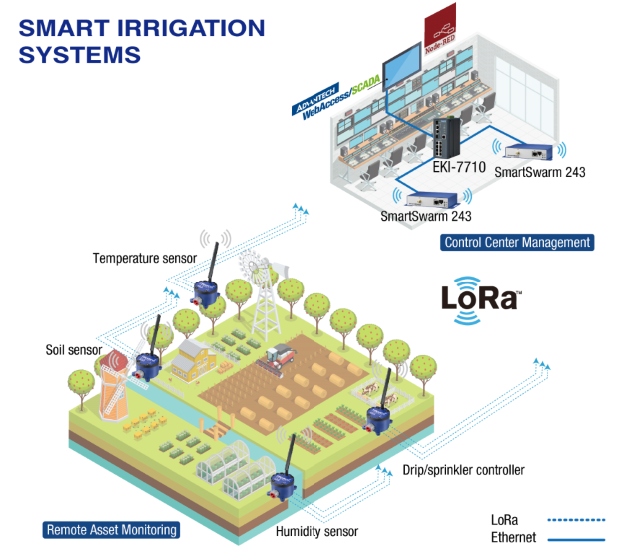 Establishing a smart irrigation system to help users control, monitor, evaluate, and make decisions requires some knowledge on the key product features so that the most suitable products can be selected to maximize their benefits.

IP stands for International Protecting Marking, which is a classification system for rating the degree of protection against hazards such as dust and water. With an IP66 rating, The Wzzard LRPv Node and SmartSwarm 243 Gateway are protected against ingress by and contact with dust as well as powerful water jets. The dual-power design of Wzzard LRPv Node (DC/battery) and SmartSwarm 243 Gateway (solar/battery) also means that users have multiple deployment options.

Advantech Wzzard Nodes are ideal for irrigation sites because the presence of water, mud, high humidity, and airborne water droplets/ dust at these locations poses a constant threat. With its dual-power design, the Wzzard LRPv Node frees users from having to install extra cabling and thus reduces costs while simplifying deployment. Additionally, the user-oriented design of the SmartSwarm 243 Gateway ensures deployment is user-friendly. This technology does not mean that you need to replace your existing pipes and pumps—incorporating IoT technology into your network does not render your current equipment obsolete; rather, it simply makes your network smarter.

The described features make it possible to place sensors and Internet gateways in locations where AC power or wired Ethernet is unavailable, and the high flexibility of the dual power-saving modes and alarm system can minimize costs by conserving power and preventing disasters.

PreviousRemote Monitoring and Controlling of Greenhouses
NextAutomation of the agricultural sector