Security experts have published a report today warning that the new and fast-rising LoRaWAN technology is vulnerable to cyberattacks and misconfigurations, despite claims of improved security rooted in the protocol's use of two layers of encryption.

LoRaWAN is particularly popular with developers of Internet of Things devices. Previously, to connect an IoT or other smart device to the internet, companies had to connect the IoT device to their private internet Wi-Fi network or devices had to ship with a SIM card, allowing the device to use a cellular network to report back to a command server.

LoRaWAN is an alternative to these setups. An IoT device with a LoRaWAN client will broadcast data via radio waves to a nearby LoRaWAN gateway (in most cases, an antenna). The Gateway takes this data and forwards it to an internet server, which then relays the data to an application backend or dashboard.

This type of LoRaWAN setup is often used in the real world. For example, smart parking, smart lighting, traffic management, or weather monitoring devices across a "smart city" use LoRaWAN to report to a central data collection station. Since the protocol works via radio waves instead of relying on Wi-Fi networks or SIM cards, this makes complex IoT setups easier to deploy, as it's easier to install a few radio antennas (gateways) across a small geographical area compared to tens of Wi-Fi routers or thousands of SIM cards.

Due to this low cost approach, LoRaWAN networks are also often used across industrial installations (to report readings from different sensors or SCADA equipment), smart homes (to report alarms, gunshot detections, or home automation tasks across neighborhoods or cities), smart hospitals, smart crop fields, and so on.

But broadcasting data from devices via radio waves is not a secure approach. However, the protocol's creators anticipated this issue. Since its first version, LoRaWAN has used two layers of 128-bit encryption to secure the data being broadcast from devices -- with one encryption key being used to authenticate the device against the network server and the other against a company's backend application. 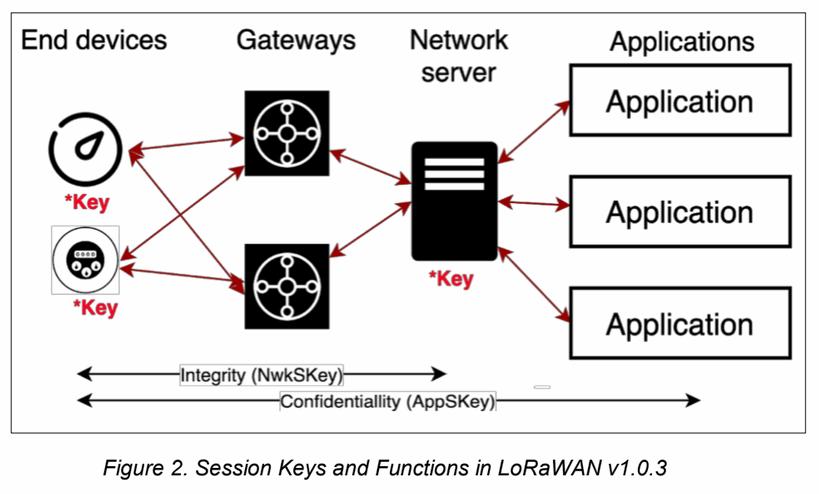 In a 27-page report published today, security researchers from IOActive say the protocol is prone to misconfigurations and design choices that make it susceptible to hacking and cyber-attacks.

The company lists several scenarios it found plausible during its analysis of this fast-rising protocol:

"Organisations are blindly trusting LoRaWAN because it's encrypted, but that encryption can be easily bypassed if hackers can get their hands on the keys - which our research shows they can do in several ways, with relative ease," said Cesar Cerrudo, CTO at IOActive.

"Once hackers have access, there are many things they could potentially do - they could prevent utilities firms from taking smart meter readings, stop logistics companies from tracking vehicles, or prohibit hospitals from receiving readings from smart equipment. In extreme cases, a compromised network could be fed false device readings to cover up physical attacks against infrastructure, like a gas pipeline. Or to prompt industrial equipment containing volatile substances to overcorrect; causing it to break, combust or even explode."

To aid with the auditing part, the company has released on GitHub an open source LoRaWAN auditing framework named LAF.

By Catalin Cimpanu for Zero Day