System of forecasting of maintenance

A global leader in screw manufacturing partnered with Advantech to create a predictive maintenance system for screw forming machines. 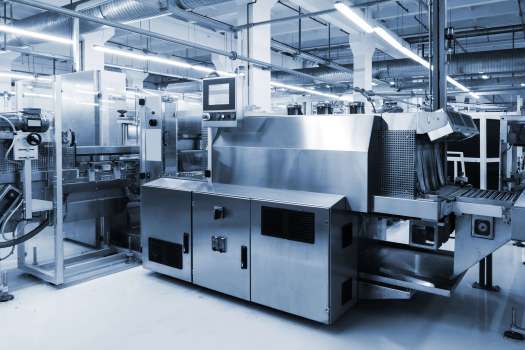 System of forecasting of maintenance

A global leader in screw manufacturing partnered with Advantech to create a predictive maintenance system for screw forming machines. With production capacity of 6.6 billion nuts per year, the company depends highly on automated manufacturing equipment. As such, the risk of considerable losses in the event of equipment failure is high. Previously, experienced technicians had to literally listen to the equipment and identify the source of a problem when a machine would make unusual noises.

However, this subjective troubleshooting method is relatively limited, particularly given the noise levels of factories, difficulty in transferring experience to other workers and the unique sounds that different machines make. To rectify this problem, the company invested in predictive maintenance. Initially, they considered purchasing a solution from a major overseas automation vendor. However, because of the high costs, the company sought a local system integrator.

Finding a local manufacturer suitable for this task proved difficult, primary because working with screw forming machines requires considerable specialized knowledge. Most equipment suppliers and system integrators lack relevant experience and would likely need to invest time and effort into research and development. Even after system implementation, calibration would require substantial effort, and system performance would unlikely be sufficient. Eventually, a professional system integrator was contracted to implement the system with Advantech's products. Leveraging Advantech's extensive experience in this field, the screw manufacturer successfully completed its predictive maintenance system. To create an optimal system, sufficient technical expertise in screw forming in imperative. In the process, metal wires are cut and then passes through a cold forging press three times before the screws are formed. Subsequently, the rough cut must go through several operations, including turning, thread rolling, heat treatment, and electroplating before they are completed. The most important step in this procedure is cold forging. Because this process requires up to dozens of tons of pressure to impact the screw die, the die's life span is difficult to estimate. Replacing it too early would be too costly, while delaying its replacement might damage the machine and delay production. Thus, accurately estimating the die's useful life is critical.

Advantech proposed using an IPC-7220 chassis with an AMB-584G2 motherboard (featuring a Core 17/4770S CPU), a PCIE-1810 analog multifunction card (500-KS/s, 12-bit, 16-channel) and a customized PCLD-8712SSO signal conditioning terminal block. The operation of the overall system is as follows: a piezoelectric sensor is installed in the forming machine to monitor the stamping waveform to determine the degree of deterioration of the die in order to ensure timely replacement.

The key performance indicator that the company sought to improve by implementing the predictive maintenance system was the availability rate. Following installation of the system, the screw forming machines used by the company can now accurately detect the status of each die, and the likelihood of equipment failure has been significantly reduced. 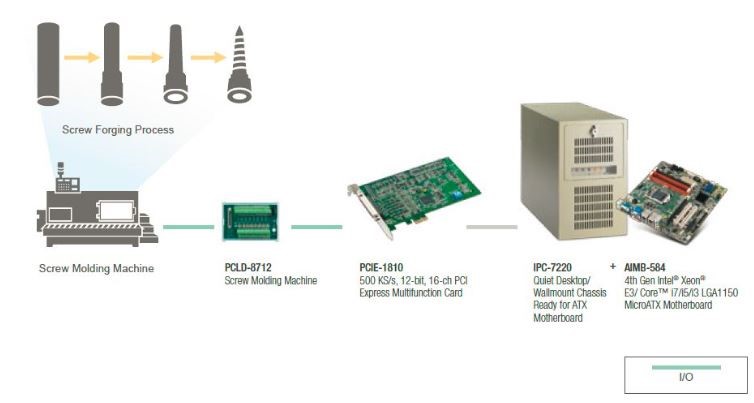 The screw forming machine is a typical example of an industrial IoT (IIoT) application, which must be constructed on the basis of specialized knowledge about vertical markets. For screw forming machines, because the stamping pressure exerted on the die is extremely high and because screws are produced in large volumes at very high speeds, accurately detecting the die status is inherently difficult, which is why adequate industry experience is essential in deriving the optimal implementation method. Advantech equipped the forging mold sensors; by continuously analyzing the vibration wave forms to determine the mold's condition, the entire system was completed in less than 6 months, including design, testing, implementation, and calibration.

For smart factories of the future, IIoT will be the principal framework for manufacturing systems. However, there are many types of manufacturing, each involving a different set of products and vastly different automation equipment. Thus, the development of IIoT systems relies on the expertise of system integrators and equipment suppliers for systems to be built in a reasonable time frame.