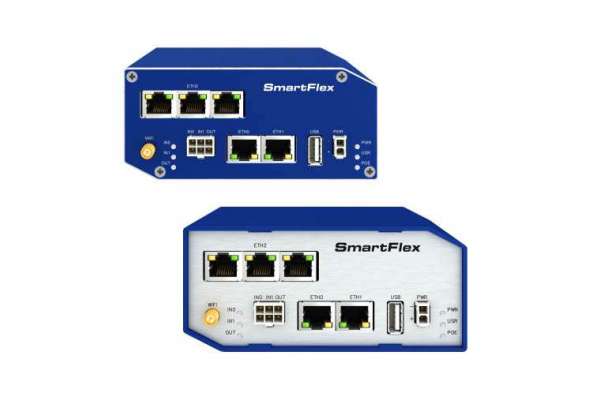 LAN Industrial router SmartFlex SR300 is an ideal device for the realization of a secure connection of two local area networks (LANs). Interconnection is carried out using two ETH-ERNET 10/100 interfaces and secure tunnel (IPSec, OpenVPN, L2TP).
The other equally important ways to use this router is to connect any device with RS232, RS485 or I/O interface to the local network (LAN). For this purpose, SmartFlex SR300 is equipped with two ETHERNET 10/100 ports and other interfaces based on the version of the router chosen by the user. As a standard, this router is equipped with two ETHERNET 10/100 ports, one USB 2.0
Host port, two binary inputs and one output (I/O connector). An integral part of the router is also a memory card reader placed on the rear panel. This reader allows SmartFlex SR300 to operate with microSD cards and increase storage space of the router up to 64 GB (32 GB in case of SDHC cards). The router can be equipped with WiFi module on customer’s request, however it is not possible to order it and add to the router later. The router can be equipped with PoE PD (Power over Ethernet – powered device) to power the router via Ethernet, or PoE PSE (power source equipment) to power other devices by the router. Richer range of interfaces is available in versions containing three switched Ethernets. SmartFlex SR300 is supplied either in a plastic or metal casing, based on the requirements of the customer.

Where was this product used